Houston Renaissance Festival, and the Premier of My New Armor

It's been a busy few days, but we had a great day at the Ren Fest today. The weather was a bit chilly, but at least it didn't rain like they were predicting.

My armor survived being tightly packed into a suitcase for two days. I only had to touch up two small areas where the paint was scratched, and one rivet popped out which I had to replace. Since I brought everything I needed to repair such things, it was a simple matter to fix.

I put the complete suit of armor on for the very first time this morning, just before we left for the festival. Thankfully, everything fit pretty well. Since we knew it was going to be cold, my wife (the famous Geekwif) brought the heavy cloak from my old costume. It kept me nice and warm, and you will see it draped over my shoulders in the pics below.

The Geekwif also has a new costume this year, a sort of Middle-Eastern warrior priestess based on a character from the Pathfinder boxed game. Our close friends Eric and Bonnie are hosting us in the Houston area, and they enjoy wearing costumes and getting into character at least at much as we do, so the four of us have a great time together.

But enough of my idle chatter. You came here for the photos, right? Look below for what you came for... 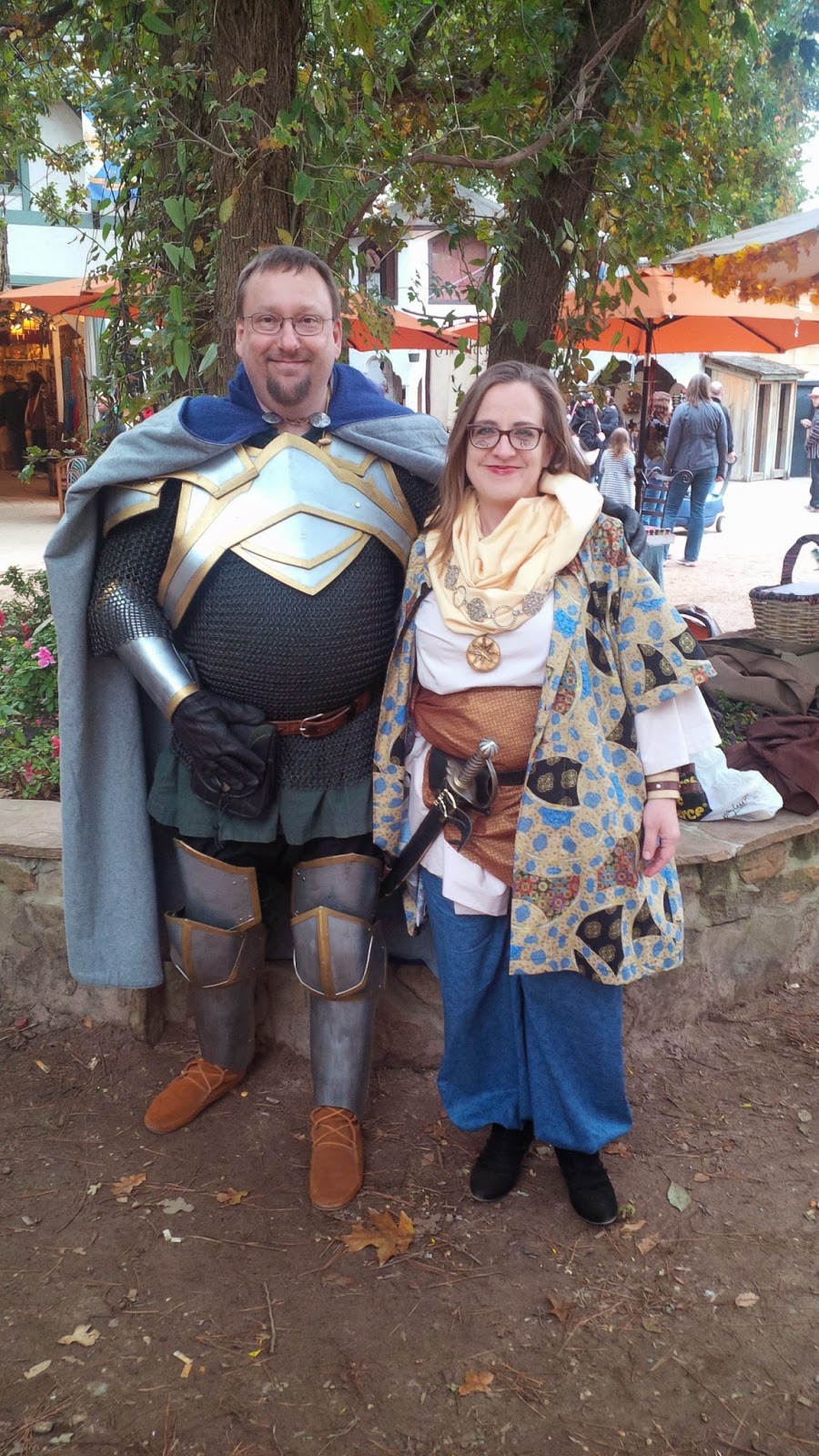 Me and the Geekwif. The cloak has two layers, gray on the inside and blue outside. I bought a nice two-piece cloakpin set today at the Festival, which you can see holding the two sides together beneath my chin. 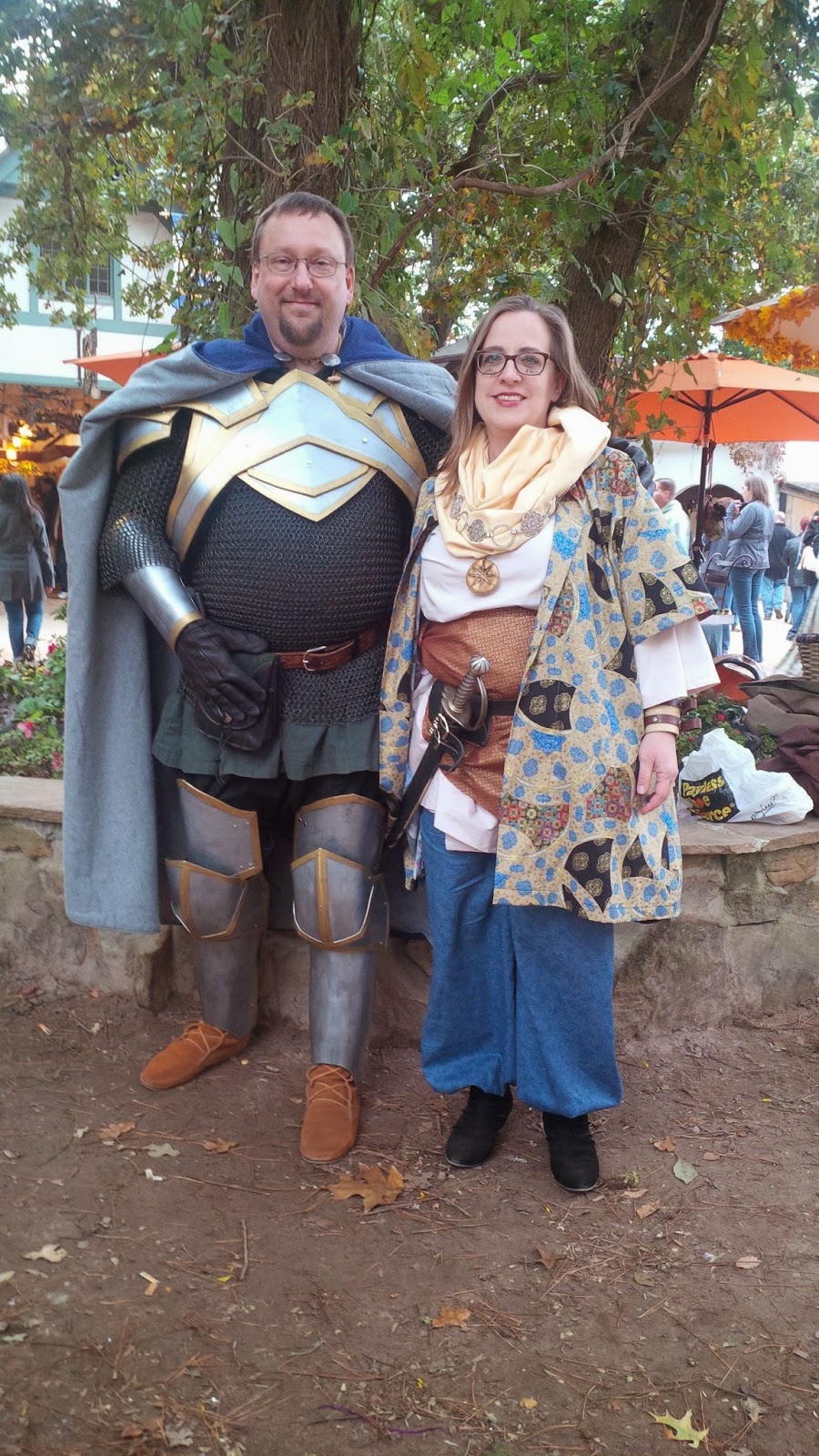 I don't recall if I had mentioned this before, but as the time for my trip got closer, I realized I wasn't going to be able to finish the entire set of armor. So, I set aside the hip protectors for the time being. They are partially painted, sitting at home waiting for me to return and finish them. But overall I am pretty happy with the way the armor came out, even with those pieces missing. 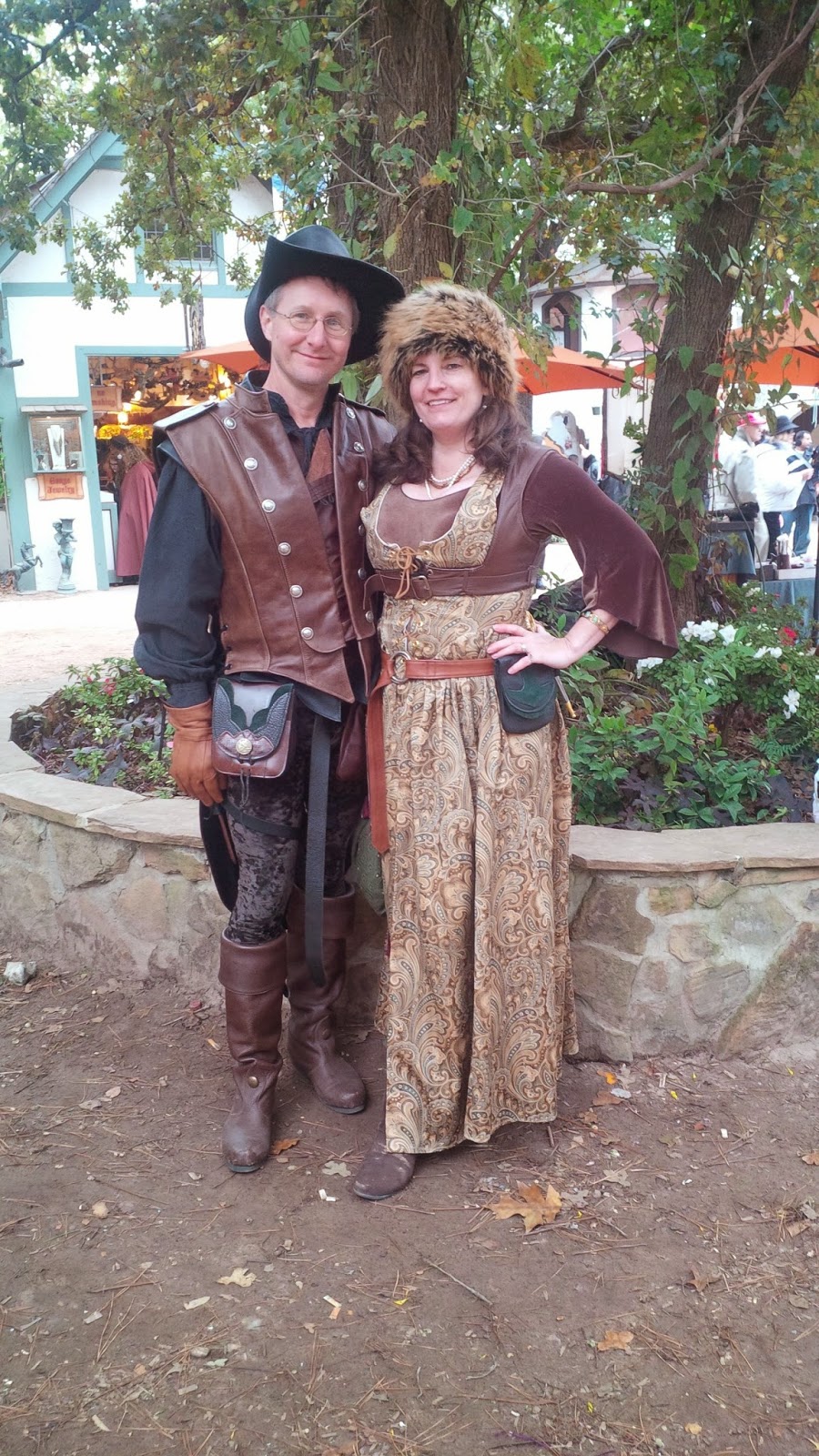 Our friends, Eric and Bonnie. Bonnie also had a new costume this year, sort of a barbarian huntress theme. She was looking at recurved bows today, which would go nicely with the outfit and add some depth to the character. 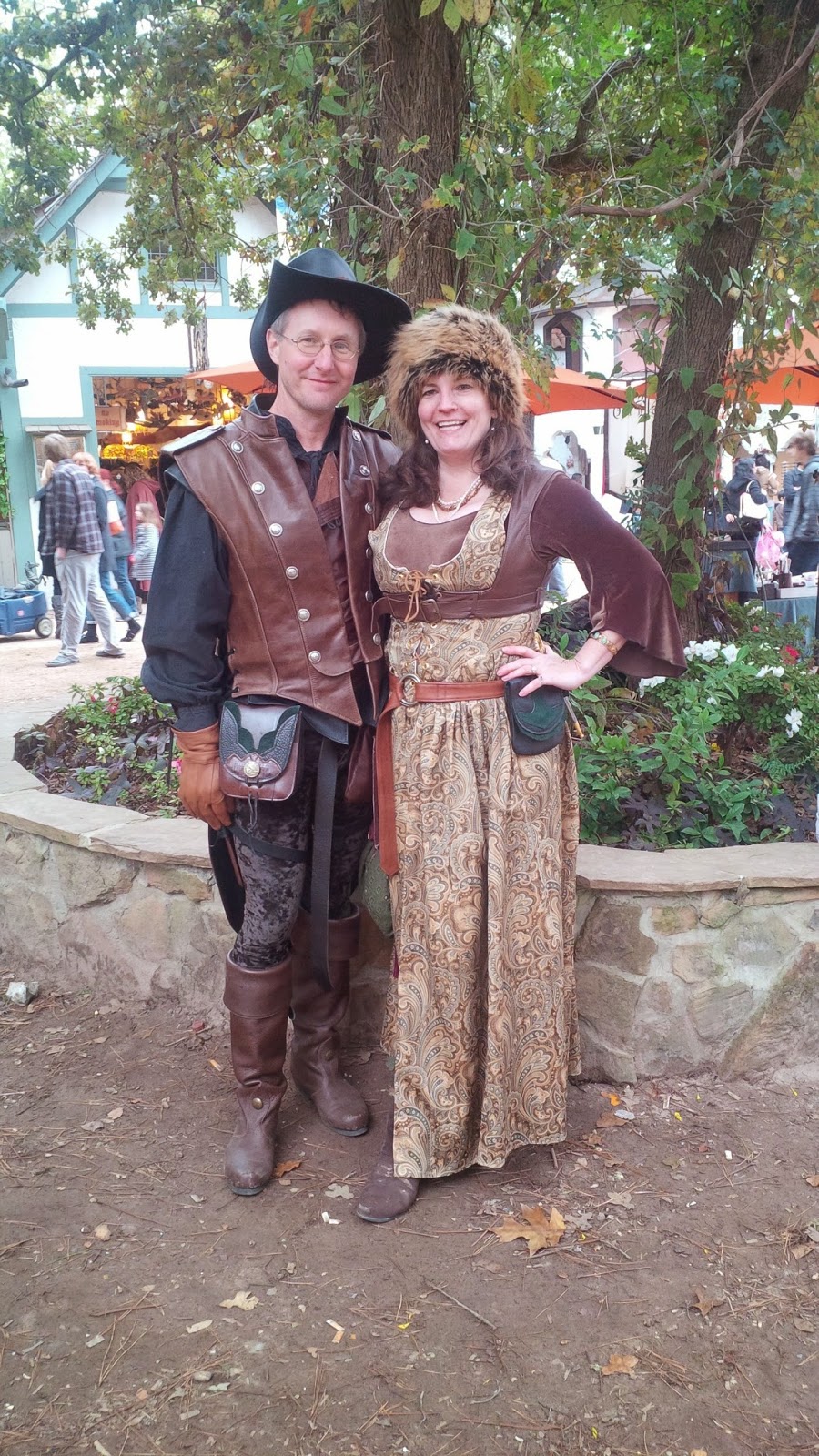 Eric has a pretty nice matched set of leather coat and boots, and he bought the gloves just today. It's a fun costume that he's gotten good use out of over the years. 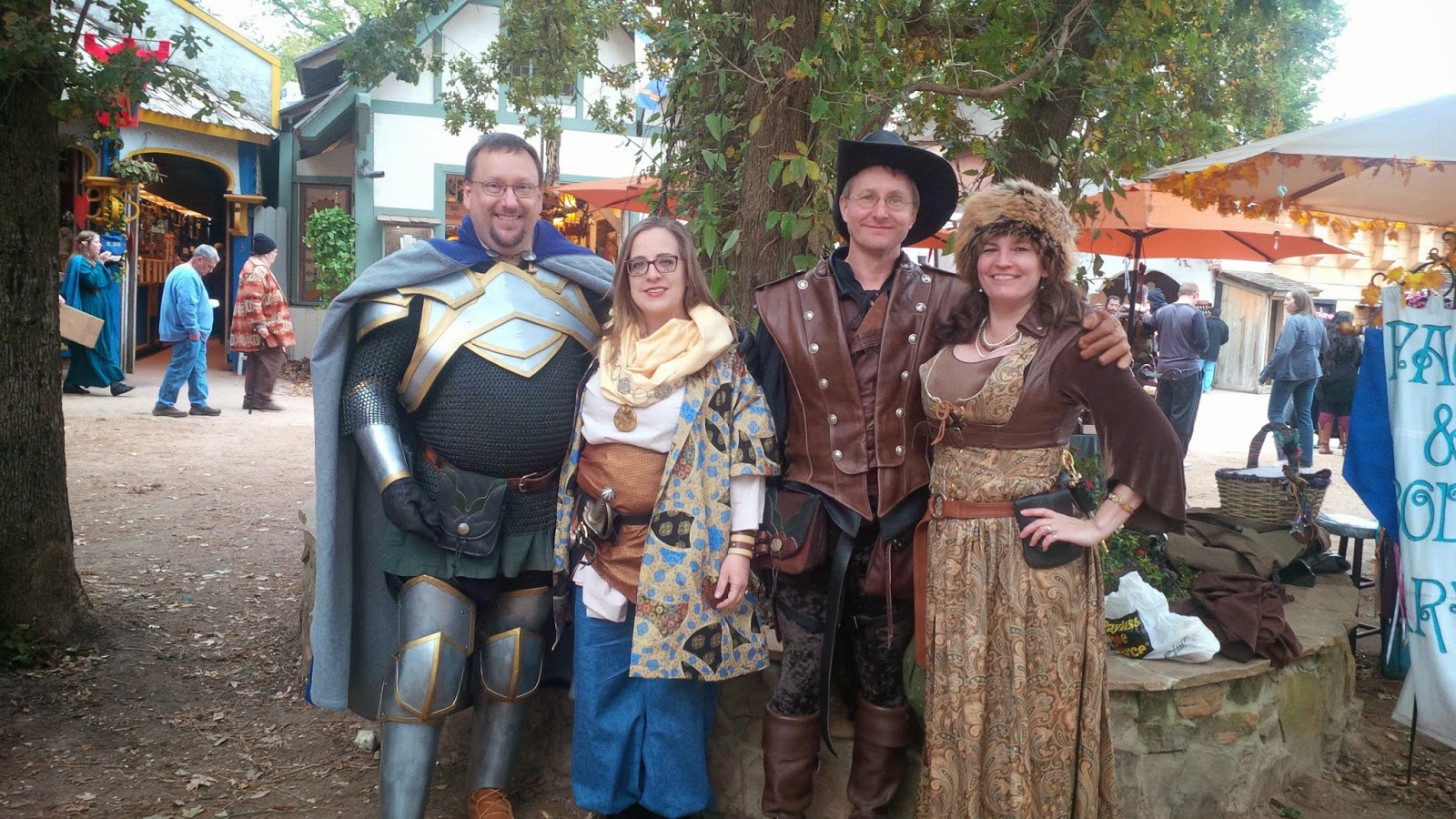 The four of us together, natch.

So this post doesn't tell you a whole lot, but if you wanted to see some pics of my completed set of armor, these are what I have so far. We're going back to the Fest tomorrow, but I think I'm going to wear a simpler costume, with just a cloth surcoat over the chainmail shirt, and the cloak over that as well. The armor is fun to wear but it can be a bit restrictive, and I think I'd like to just change things up a little bit tomorrow.