On the Turning of the Seasons and Autumn Festivities

It's been a busy week, and unfortunately I wasn't able to make any real progress on the armor. Did a little work on the complex knee pieces, but that was all. I did write down a couple of story ideas for the next Balfrith novel, which was fun.

This may be one of the last really nice weekends we get here this year. The weather is threatening to turn cool, which isn't entirely bad, but Summer is definitely going away. The Fall colors are already in evidence, and are making the countryside quite lovely.

Today, the Geekwif and I, and a couple of friends, are headed to the Minnesota Renaissance Festival. I'll be wearing the same costume I've had for over a decade, augmented by my new shirt of chainmail which goes quite nicely with the rest (I tested it out yesterday). The down-side of the aforementioned nice weather is that I will probably be very hot and sweaty within an hour of arriving at the Fest. The trick to overcoming that, of course, is plenty of hydration. Water may, in fact, be the best beverage to stay healthy, but at the Ren Fest I find myself rather partial to beer, ale, and mead. However since I am also today's driver to and from the festivities, I will have to compromise a bit on that last point.

I'm sure we'll take a few photos in our costumes, and I may even post some of them right here, just for fun.

ETA: Here is a nice photo of the Geekwif and I, in our costumes at the festival yesterday. The chainmail warmed up rather quickly in the sun, so my prediction bore out as expected. 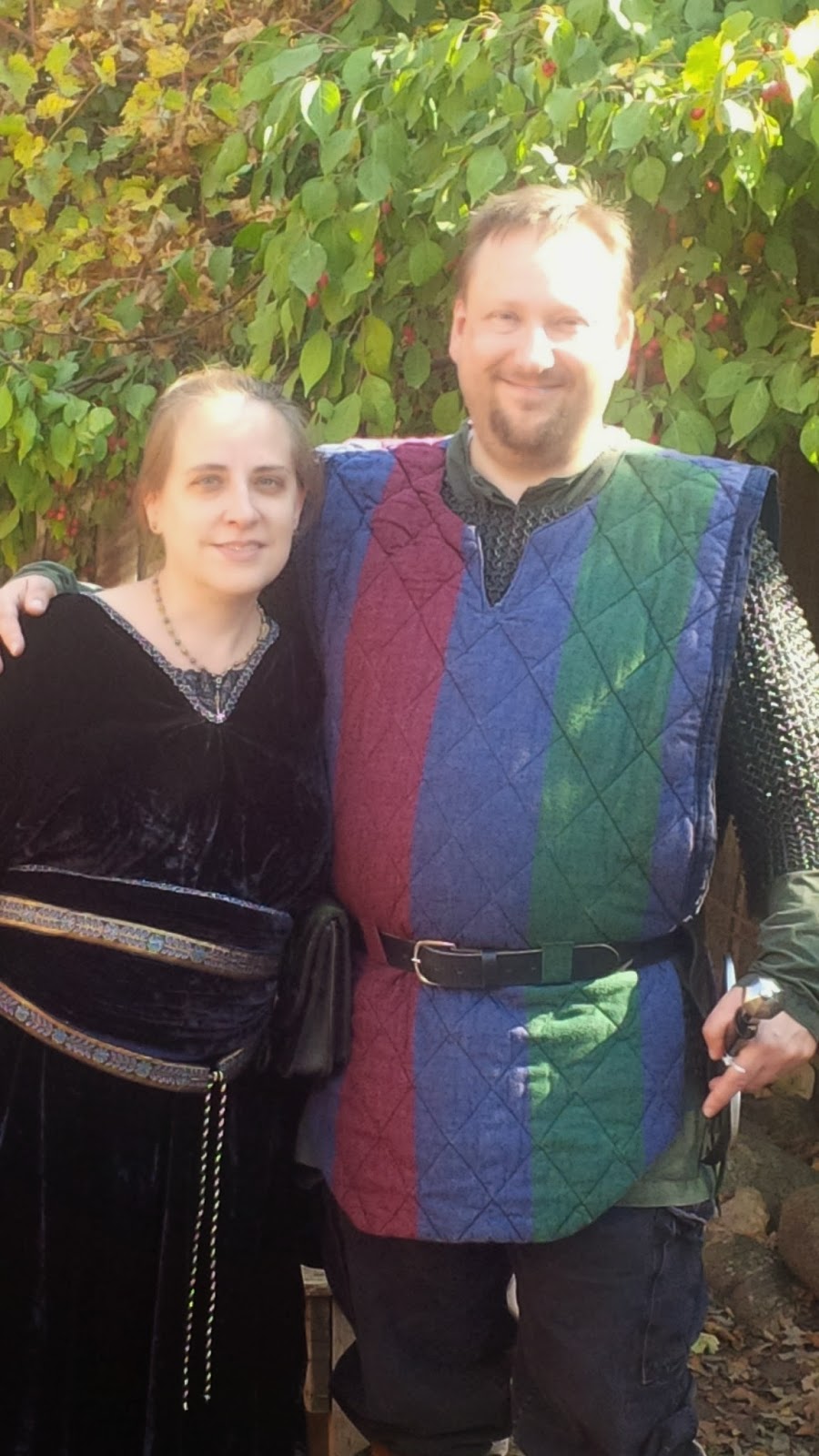 Posted by Dave Sherman at 6:46 AM No comments:

As I mentioned a few days ago, I am working on a new costume armor for the Renaissance Festival. The Geekwif and I annually go to both the Minnesota and Texas (Houston) festivals - Minnesota because we live relatively nearby, and Texas because we have good friends in the area who are also festival goers. So, after posting all those pictures in the last blog entry on the topic, I thought I'd give a quick update on my progress.

First, the second pauldron is done, so I now have protection for both shoulders. This was an easy one to get done, as the shapes are pretty simple to cut out, and forming the second set of pieces was literally as simple as using the first set as a mold. Just warm up a piece in the oven, then take it out and lay it inside the matching piece that is already formed. The new one will quickly and easily take the shape of the "mold".

Second, I have started cutting out the remaining hip pieces, which are total nine overlapping strips on each side. I've got one hip done, and three strips cut out for the other hip. So I've got six more to go, and then I'll heat and shape them all at once to make sure they fit together nicely.

Third, I've fabricated the second knee piece, which is to say that I curved the pieces I already had cut out, and glued them together along the middle seam. This is actually the most difficult piece I've had to do, because of the off curvature of the pieces and the fact that I had to cut them, shape them, and then glue them together perfectly along that seam. And then there is a second set of pieces, similarly glued together on a seam, that connect to the knee piece and act as a sort of bridge between the greave and the knee. It's hard to explain, but I'll be sure to post pictures when I have the pieces ready for final assembly.

At this point, I just have to finish up the pieces in process as described above, and then I have a couple of very minor pieces that still need to be cut and formed. One is a neck protector that will attach to the breastplate. The other is a protective flap that connects to the bottom of the greave and gives some extra armor over the foot and ankle.

Of course when I say I just have to do the above steps, I'm really only talking about the initial fabrication. Next steps are to add some decorations around the borders, then sand everything nice and smooth to make it ready for paint. Paint being the final step, I have already read that it can easily take as much time as all the preceding fabrication. I guess we'll find out if that is true. More pics will follow as I get into this final phase.

Posted by Dave Sherman at 8:37 PM No comments:

It's been a nice, relaxing weekend here at the Geek house. We cleaned up the place on Saturday, in preparation for a Settlers of Catan dinner party in the evening. Everyone brought food, and the Geekwif made a couple of different pastas and a couple of different (amazing!) sauces. Food was eaten, beverages drunk, and much laughter shared. Oh, and we played a six-person game of Settlers. I have been the reigning king of Catan for the past few parties. But last night, my rule was overthrown, and I handed the crown over to a new queen - and gladly so.

Before we really got to work cleaning yesterday morning, I also wrote down a few ideas for my next story - the further adventures of Balfrith. Even while I'm working on my Ren Fest armor, the ideas are floating around in my head, so it seemed like a good idea to write a few down so I don't forget.

Today, I pulled out Final Fantasy III on the old Wii, and spent most of the day playing the classic RPG. Yeah, it was a good day.

Monday and Tuesday I'm taking days off from the IT world, to continue the work on my costume. Wednesday, it's back to the office. Ah well, all good things...

Posted by Dave Sherman at 5:25 PM No comments:

As promised, I took a bunch of photos of my armor work in process. 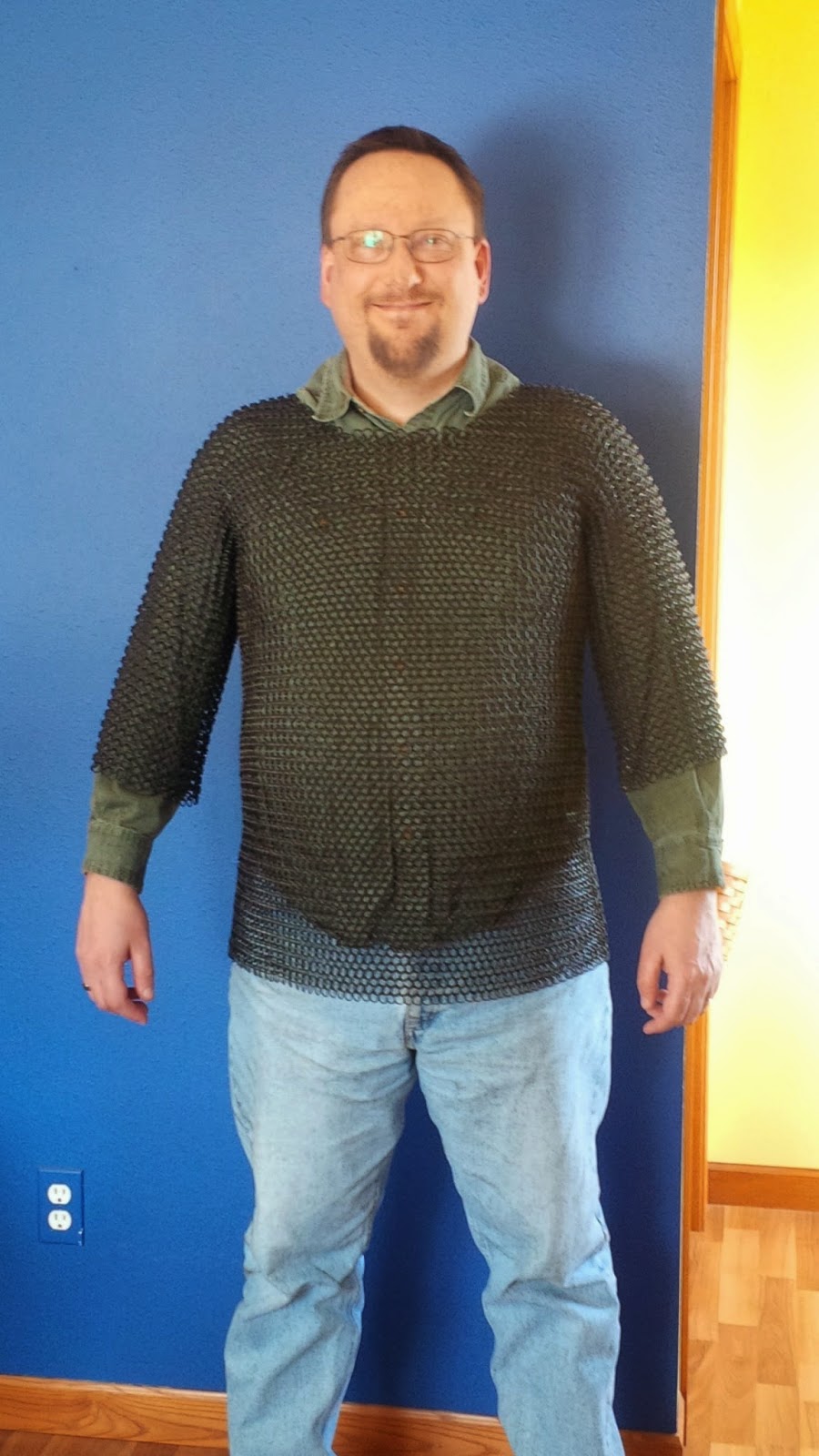 Chainmail hauberk. Made in India, bought on Ebay. Real high-carbon steel, coated in oil to keep it from rusting. This will form the base for the whole suit of armor. 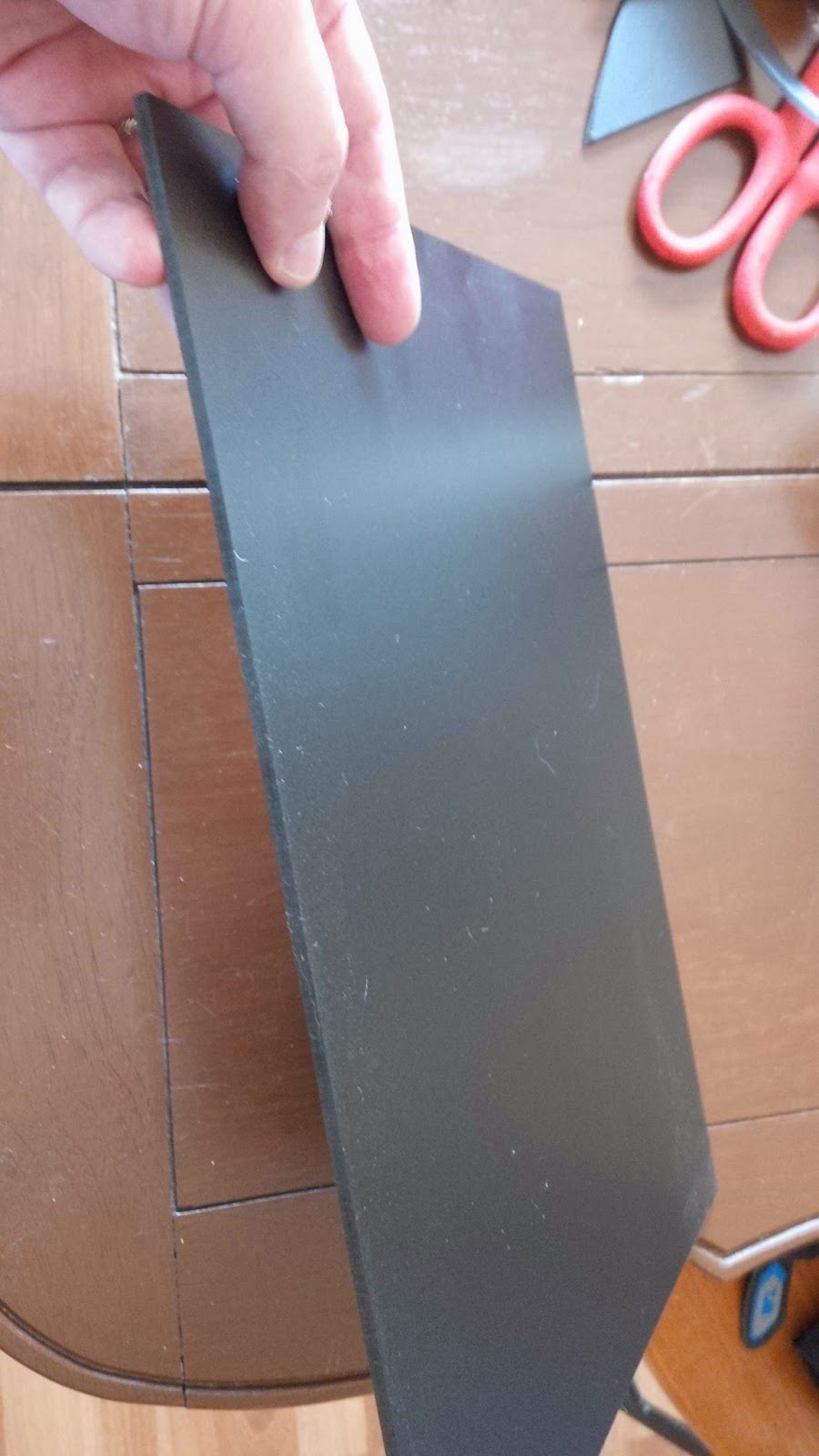 Sintra, aka closed-cell foam PVC, aka the same plastic used in making all kinds of signs. This is the main material I am using for the armor. It can be softened and formed at about 225 degrees Fahrenheit, making it very easy to work with. 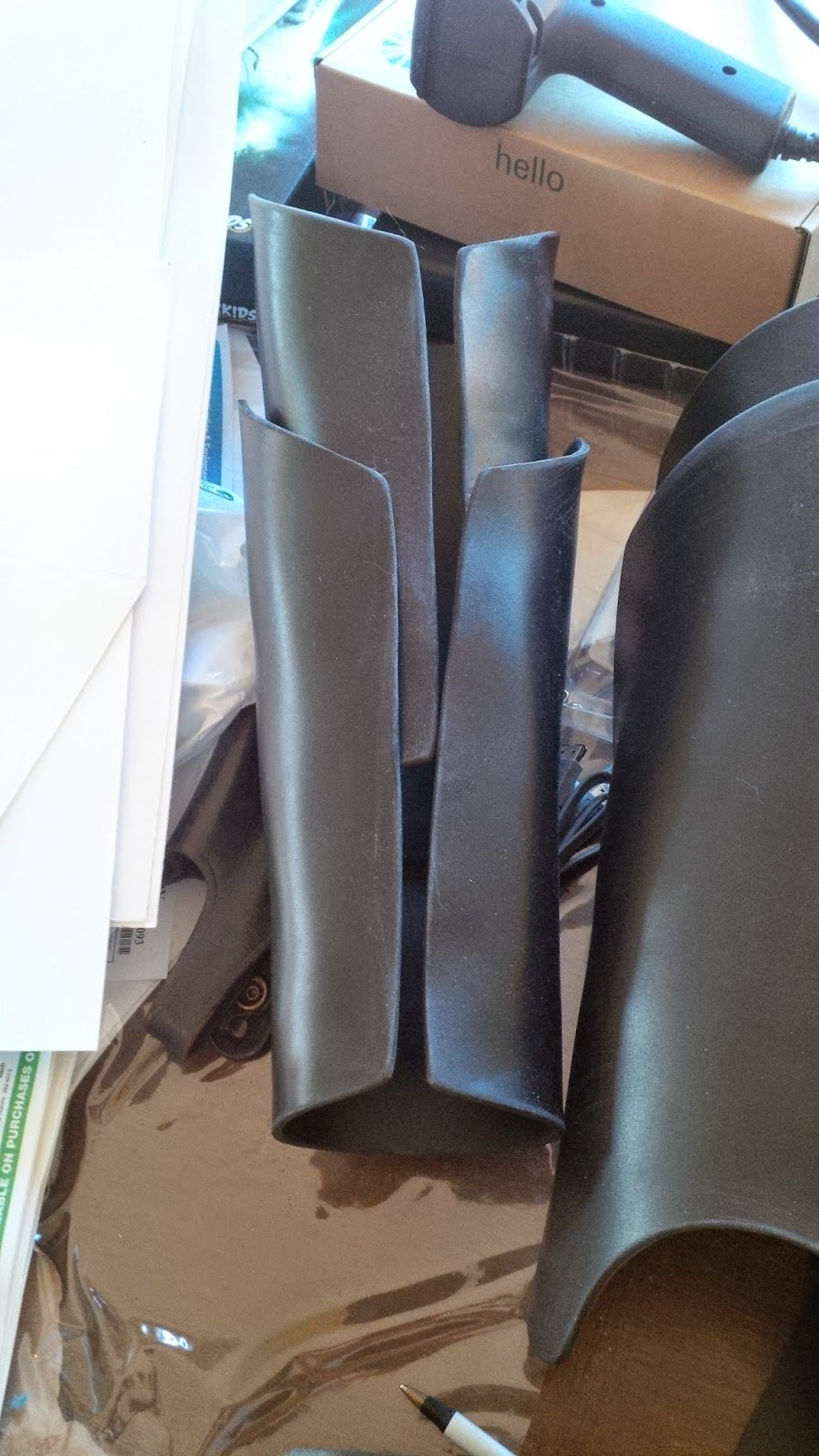 Vambraces (forearm protectors), formed directly on my arms while wearing a thick sweater to protect me from the heat. 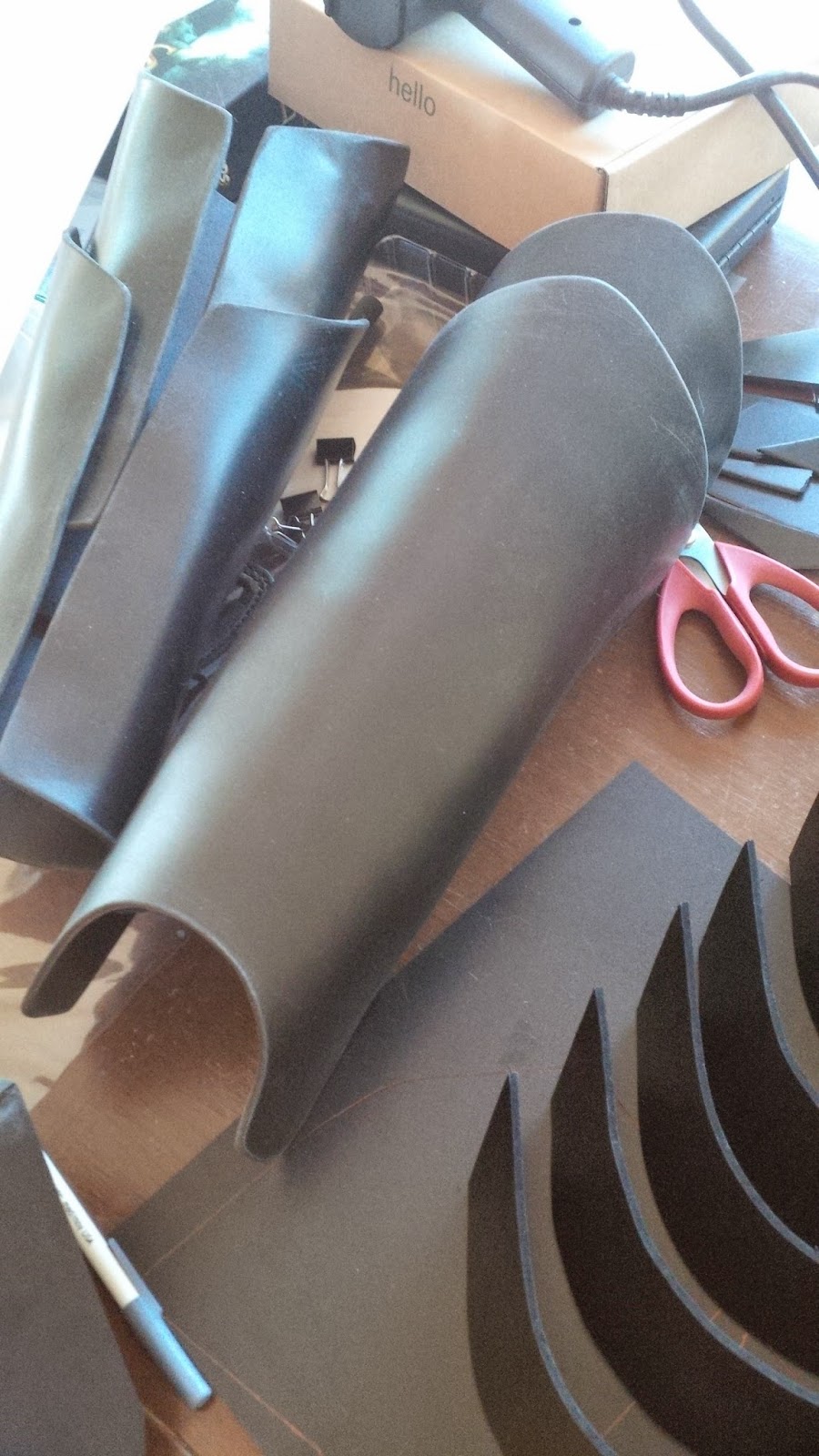 Greaves (shin protectors). I formed these over a 2-liter soda bottle rather than using my legs. 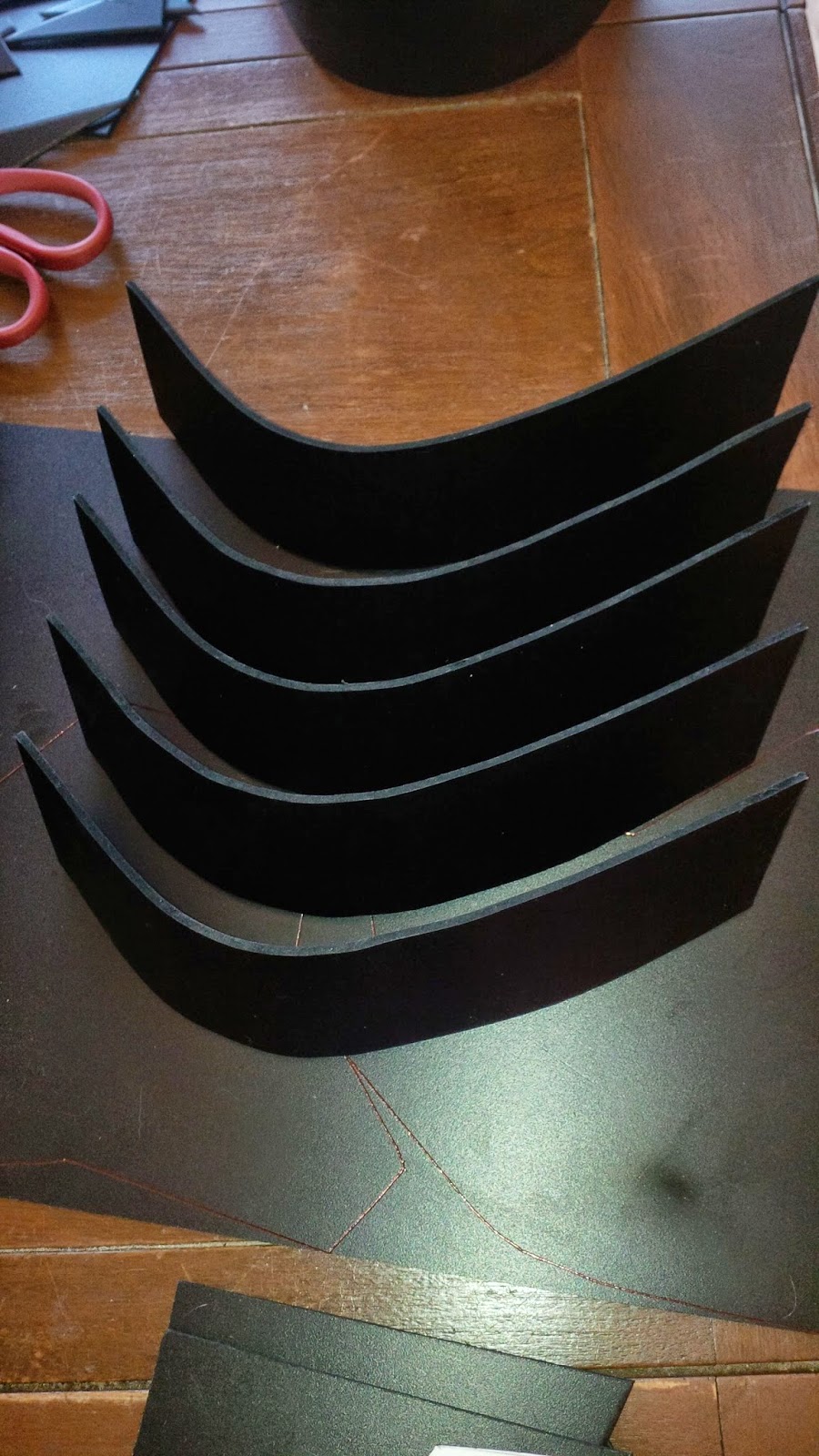 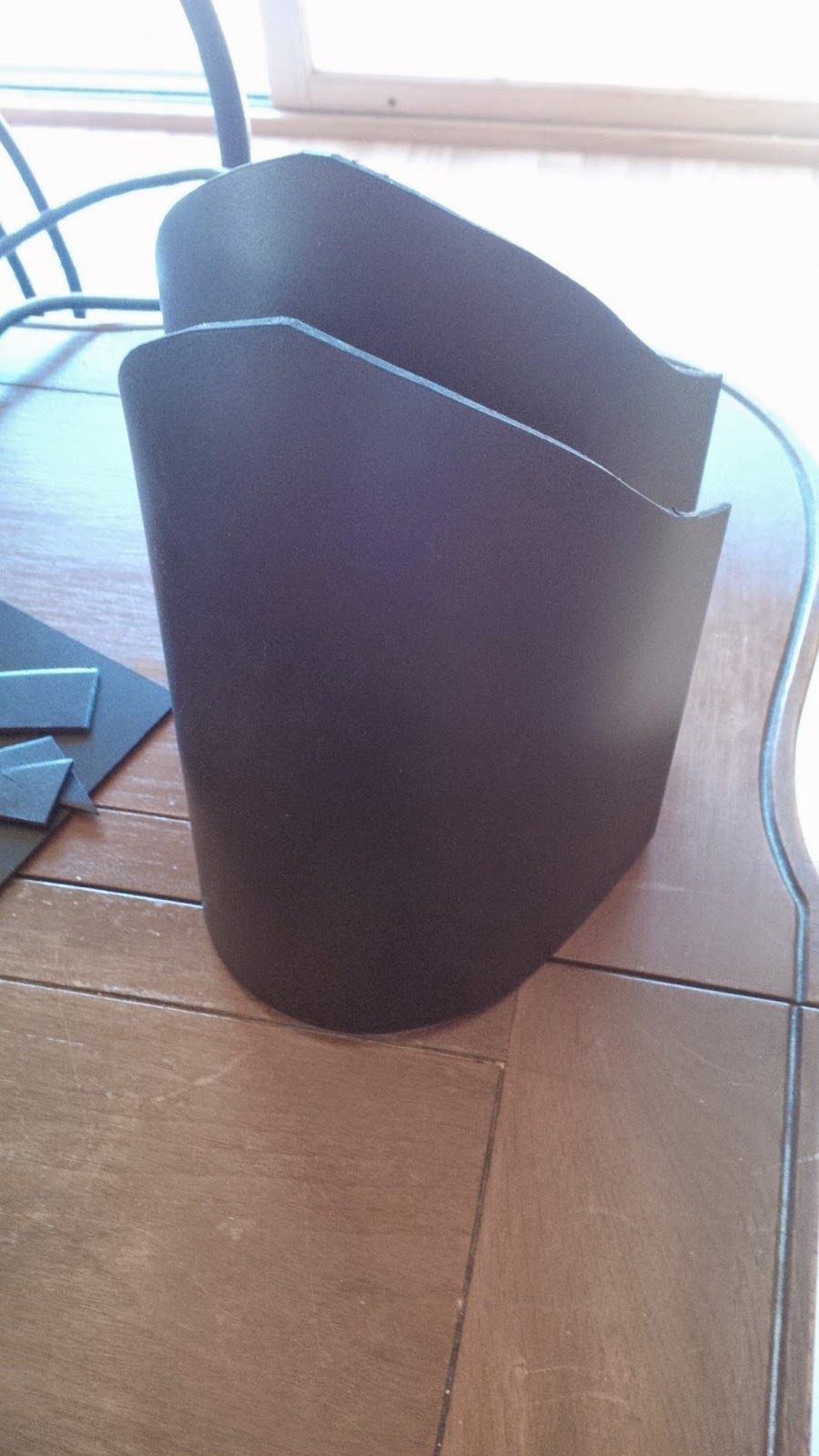 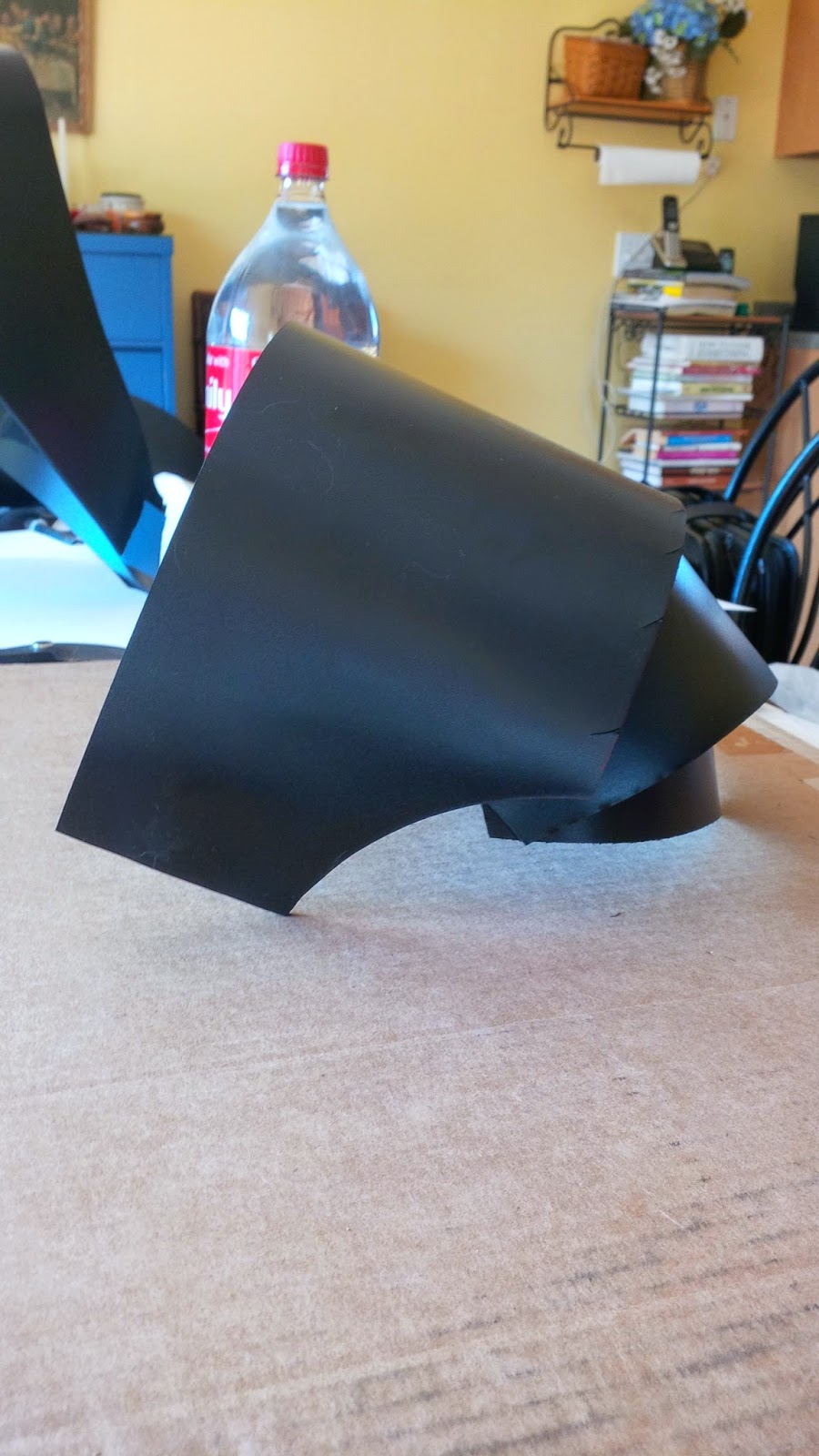 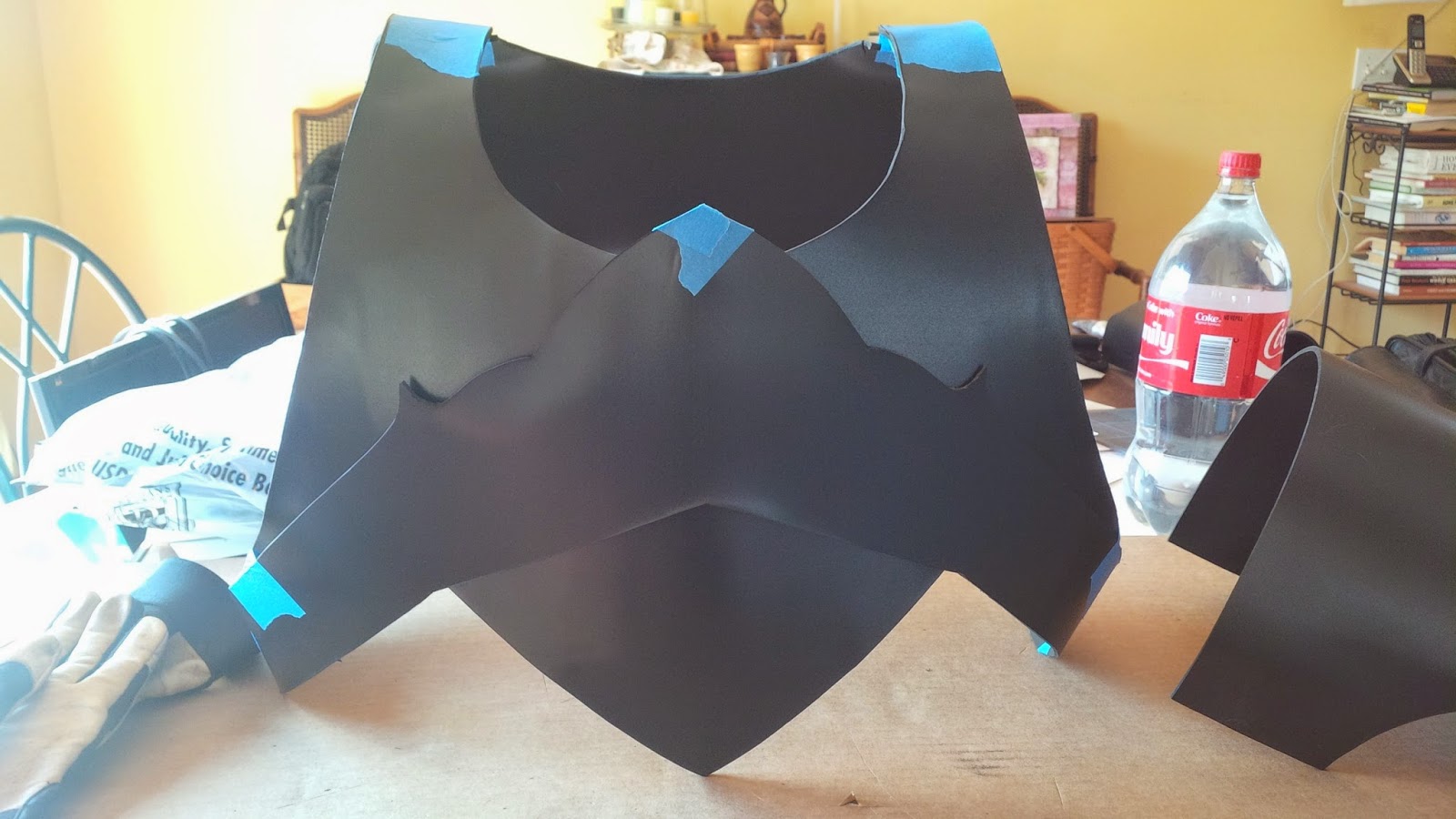 Chest and back protection, connected using blue masking tape. I'll call it a breastplate from here on out. 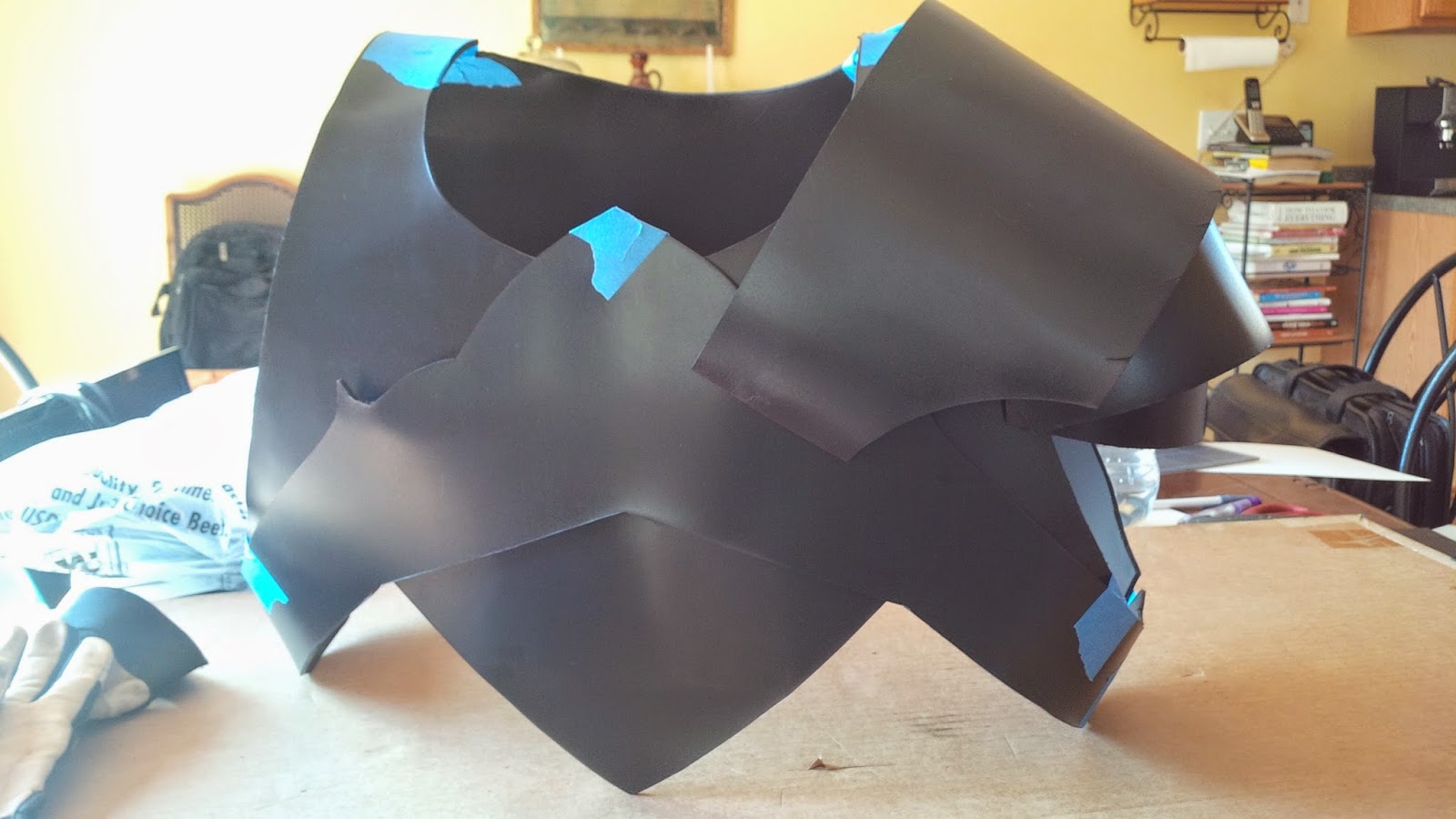 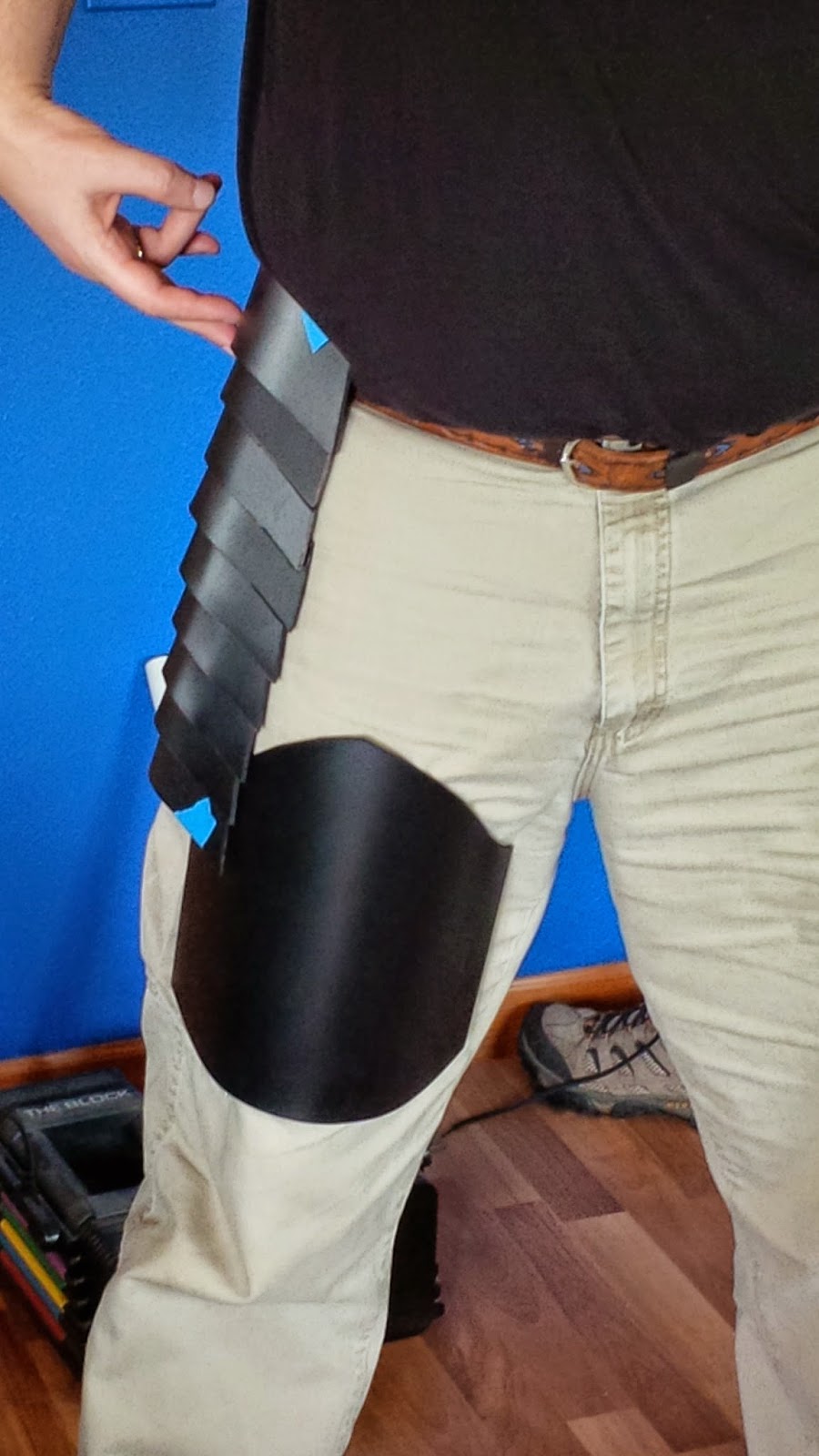 Thigh and hip protectors, taped in place on my leg. Eventually I will have leather straps to hold things in place. 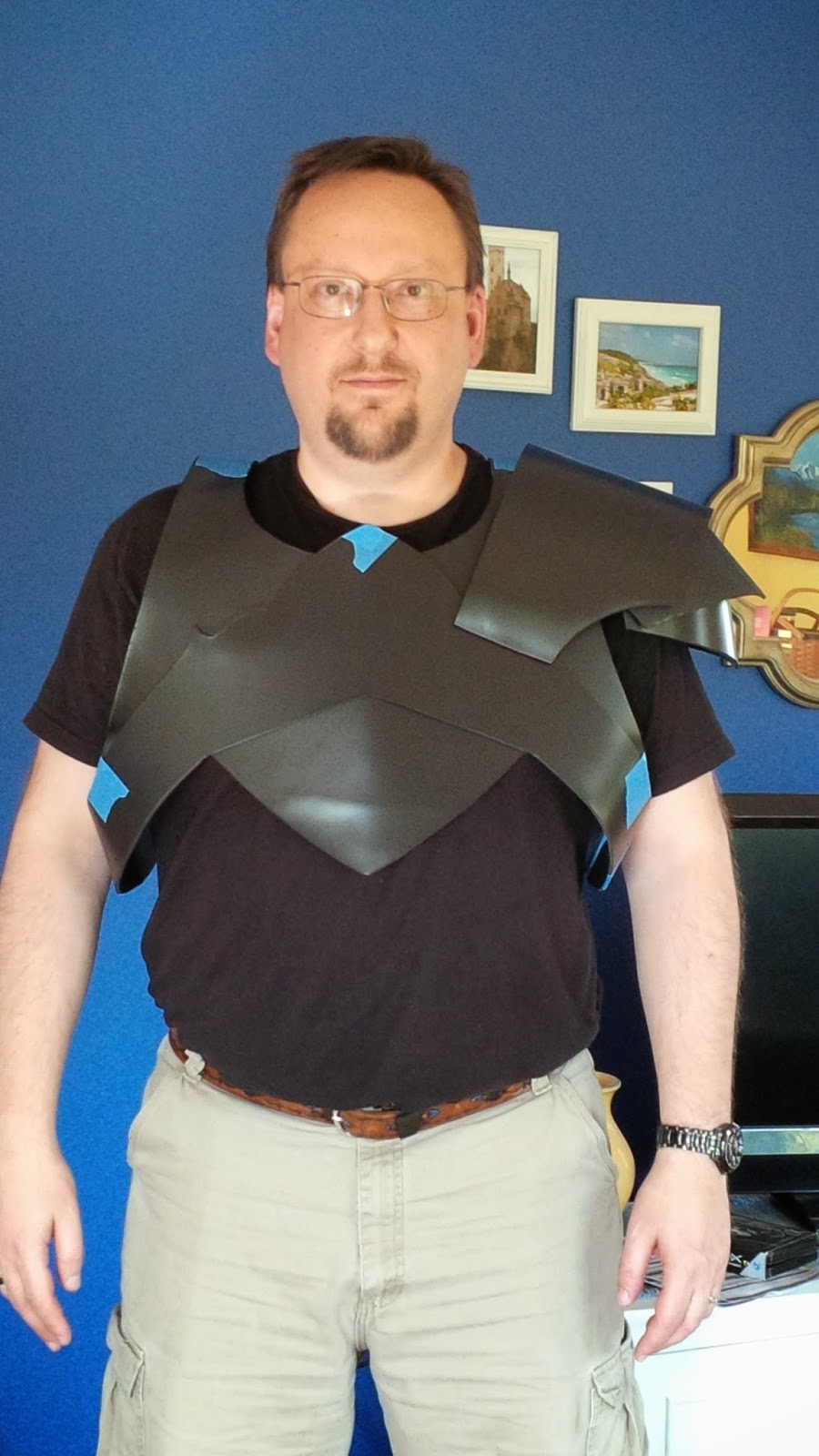 Me wearing the breastplate and pauldron. I will be making another pauldron, just need to replicate the form of the existing one.

Posted by Dave Sherman at 5:19 PM No comments:

The Geekwif and I have had an ongoing basement-finishing project for the last few years. Of course, when I say "ongoing", what I really mean is that we started the project with great vim and vigor, but we eventually ran out of steam and momentum about a year and a half ago. At that point, we had finished the painting. Prior to paint, we had:


So, it's not like we didn't get very far. In fact we did a LOT of work over a period of about a year. And while not finished, both my den and the theater are fully functional.

The theater has dimming lights (just bare bulbs for now) connected to the Control-4 system, and we have a 65" 3D plasma TV mounted on the wall. We use the PS3 to watch 3D Blu-Ray movies, and we can also watch 3D shows on satellite TV. The surround speakers are positioned about the room and plugged into their wall sockets.

My den is wired for both telephone and network, and I use it to work from home two or three days a week.

With all of that said, you may be wondering what is left? To make a long story short, we have contractors coming in this week and next to finally finish this project:
This is a fairly short list, but it's all stuff that will make the place truly finished, and usable for guests as well as just me and my wif. And these finishing tasks are of course the ones that really show when they aren't done "right". We want it all to look professional, so we hired... professionals.

And after all this work is done, we will want to purchase some new furniture. We have a few essentials to start using the rooms right away, but it will be nice to have a real desk in my den rather than just a table, and real theater seating in the theater rather than a couple of cheap folding chairs. All in good time.

For now, I'm taking a few days off from work in order to be available for the contractors, as well as do some of my own little projects and honey-do items over the next few days. Not to mention working on my Ren Fest armor, as I had mentioned previously. Pics have been taken of the work in process, and will likely go up in a post later this week.

Posted by Dave Sherman at 8:40 AM No comments:

What to Do When the Story is Done

So, what to do now that I have beta readers reading, and my part of the work is just waiting until I get some feedback? Normally I would say, "Start the next story!" However, I have some extenuating circumstances in the form of autumn Renaissance fairs.

The geekwif and I decided to make new costumes this year, so I am now turning my focus towards that. I recently purchased a chainmail hauberk on Ebay, and will be supplementing that with some additional solid pieces -- greaves, vambraces, breast and back plates, etc. Those won't be made of metal, but rather from a thermo-plastic PVC which softens at about 250 degrees (F) and becomes easy to form into simple shapes. I already have several pieces formed, and will be working through the rest over the next few weeks. Then it's a matter of painting them, and adding the leather straps and metal clips which will be needed to hold them in place on my body. I'll be sure to post some photos as I make more progress.

I'm not doing anything revolutionary -- cosplayers have been using these same materials and doing the same things for years. But instead of going to a comic con to show off my skills, I'll be wearing my work at a couple of large Ren Fests.

Posted by Dave Sherman at 6:15 AM No comments: